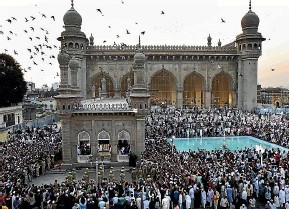 For three days, mourners queued at the Chowmahalla Palace in Hyderabad to pay their respects to the last prince of India’s most fabled royal dynasty. Chowmahalla, framed by gilded arches and leaping fountains, was the perfect place to mourn the last Nizam of Hyderabad, Mukarram Jah, whose family was known for their palaces, harems, pageantry and for owning more jewellery than all of India’s other royal houses combined. When Jah died last Saturday aged 89 at his home in Turkey, where he had lived for decades, there was no question that he would be brought home and buried in his family tomb, first being laid in a glass case for mourners to visit. After India achieved independence in 1947, it ended an era of princely states, each with royal families. All that remained were their titles until India abolished those, too, in 1971. With Jah’s death a sun sets on the country’s most eccentric royal line. Established in the 18th century, the family’s wealth originated in the diamond mines of Golconda and theirs was the largest of all the princely states. Jah’s grandfather, the seventh nizam, Mir Osman Ali Khan, kept the 184-carat Jacob diamond on his desk as a paperweight. Urban myth has it that he also bought a fleet of Rolls-Royces in an act of defiance after being snubbed by an assistant in the company’s Bond St showroom, shipping them to Delhi and using the cars to remove the city’s rubbish. Khan is said to have had 140 children from eight wives and concubines. On his daily visit to his mother in another palace, the police on the streets would whistle, a signal to the populace to prostrate themselves. In 1937 he featured on the cover of Time magazine as ‘‘the world’s richest man’’. ‘‘Mir Osman Ali Khan was also the only prince to be bestowed the title His Exalted Highness by the British out of gratitude for sending troops to the First World War and for ordering India’s Muslims not to side with the Ottomans,’’ Jah’s biographer, John Zubrzycki, told The Times. Jah was educated at India’s school for the elite, Doon School, and then at Harrow, Cambridge and Sandhurst. By the time his education was over, his father, next in line, had become a drunken debauchee and gambling addict. Osman Ali Khan decided to pass over his own son and crown Jah instead. By this time there was not much to rule over and Jah spent most of his time abroad. Perhaps his happiest years were in Australia, where he moved in 1972 to an 8000-hectare sheep farm where he lived as a gentleman farmer. He told Time magazine: ‘‘I love this place, miles and miles of open country, and not a bloody Indian in sight.’’ Jah’s blood ties provided a strong connection with Turkey. His mother was the Ottoman caliph’s daughter and so when his finances collapsed in Australia, the obvious place to move to, in 1996, was Istanbul. His visits to Hyderabad were infrequent. In his absence, the sprawling palaces decayed and the thousands of descendants of the seventh nizam’s 140 children squabbled in the courts to grab some of the fortune. Jah married five times. With much of the family’s colossal fortune spent by his father or divided by the remaining relatives, Jah spent the last few decades of his life as a recluse in a two-bedroom flat in Antalya, and then in Istanbul where he was looked after by a carer. Intensely private, Jah hardly gave any interviews. In the few he gave to his biographer Zubrzycki, he came across as ‘‘a cultivated, generous, and honourable man’’.