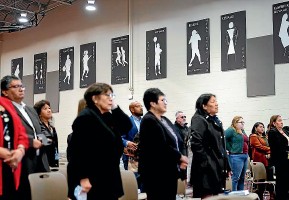 During seventh grade at Phoenix Indian School, Pershlie Ami signed up to go on what the school called an ‘‘outing’’ – promoted as opportunities for Native American students to earn spending money off campus. They were opportunities – for cheap labour. Ami said most people have no idea that the school staff would send students out to work, often doing menial tasks, for strangers whose backgrounds weren’t checked. ‘‘A family came and picked me up and took me to their home. The task that they wanted me to do was pick up dog poop in their house,’’ Ami said during a listening session yesterday in the Gila River Indian Community just south of Phoenix, Arizona, overseen by US Interior Secretary Deb Haaland. The session is part of a yearlong ‘‘Road to Healing’’ tour for victims and survivors of abuse at government-backed boarding schools. It is the fourth stop for the nation’s first and only Native American Cabinet secretary after previous stops in South Dakota, Oklahoma and Michigan. Now 67 and living in nearby Laveen, Ami, who is Hopi, still remembers vehemently refusing to clean the house and the fallout. ‘‘I got severely punished for not doing what that family had asked me to do. I was never allowed to go out on another outing,’’ she said. ‘‘Then I started to wonder what happened to some of these kids that went out on these outings, that nobody ever followed up on them.’’ Ami was one of several people who spoke during Haaland’s visit to Arizona before a large audience that included Governor Katie Hobbs and Democratic Rep. Ruben Gallego. Several testimonies addressed issues in addition to abuse, such as losing one’s culture and language. The session took place at Gila Crossing Community School, where artwork and banners reflected the heritage of the local tribe. ‘‘This is one step among many that we will take to strengthen and rebuild the bonds with the Native communities that federal Indian boarding school policies set out to break,’’ Haaland said before the session. Starting with the Indian Civilisation Act of 1819, the US enacted laws and policies to establish and support the schools. The stated goal was to ‘‘civilise’’ Native Americans, Alaska Natives and Native Hawaiians, which was often carried out through abusive practices. In Arizona alone, there were 47 federal Indian boarding schools – and that number does not even include the religious and private institutions that received federal funding to run schools. ‘‘My ancestors and many of yours endured the horrors of the Indian boarding school assimilation policies carried out by the same department I now lead,’’ Haaland said. ‘‘This is the first time in history that a United States cabinet secretary comes to the table with a shared trauma. That is not lost on me.’’ –