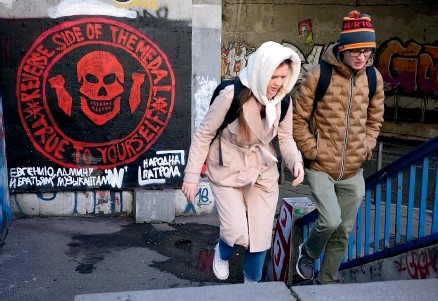 The United States will designate Russia’s Wagner mercenary group a ‘‘transnational criminal organisation’’, the White House said yesterday, an attempt to disrupt the cash and weapons flow of a private military outfit prosecuting President Vladimir Putin’s war against Ukraine with an army of convicts and contractors. The designation will come alongside additional US sanctions against Wagner and its support network, spanning multiple continents, said John Kirby, coordinator for strategic communications at the White House National Security Council. The Treasury Department intends to formalise the penalties this week. Speaking at a White House news briefing, Kirby said the designation would open up ‘‘additional avenues’’ for the United States to go after Wagner’s business activities around the world, and give other nations and institutions the firepower to follow suit. ‘‘These actions recognise the transcontinental threat that Wagner poses, including through its ongoing pattern of serious criminal activity,’’ Kirby said. He noted the Russian mercenary group had carried out ‘‘atrocities and human rights abuses in Ukraine, and of course elsewhere around the world’’. The action comes a month after the Commerce Department imposed new restrictions on Wagner, designating the group a Russian ‘‘military end user’’ to hinder the mercenaries’ ability to acquire items that use US technology. Kirby displayed photographs depicting what he said were five Russian rail cars travelling from Russia into North Korea on November 18 and returning along the same route the following day. He said those rail cars carried an initial delivery of North Korean infantry rockets and missiles for use by Wagner fighters in Ukraine. Kirby said the arms transfers stood in direct violation of United Nations Security Council resolutions. The Biden Administration first alleged last month that North Korea was making weapons deliveries to Wagner. ‘‘We obviously condemn North Korea’s actions, and we urge North Korea to cease these deliveries to Wagner immediately,’’ Kirby said. Since its first appearance in Ukraine in 2014, Wagner has risen to international renown as a ruthless shadow instrument of Russian power that has been accused of human rights abuses in Syria, Mali, Central African Republic and Ukraine. Its founder, Yevgeniy Prigozhin, spent nine years in prison for robbery and other crimes, before operating a hot dog stand, casinos and a floating restaurant in post-Soviet St Petersburg, where he came to know Putin. Prigozhin’s company, Concord Catering, won contracts with Russian state and municipal entities. Meanwhile, the former convict and caterer meddled in foreign affairs, funding the notorious St Petersburg troll farm, the Internet Research Agency, which interfered in the 2016 US presidential election, and also backing Wagner, which swelled into a large battlefield force in Ukraine this past year after Putin allowed him to recruit convicts from Russian prisons. The mercenary group – which US officials say now has 40,000 convicts and 10,000 contractors deployed to Ukraine – has for months been waging a brutal and costly battle against Ukrainian forces in the city of Bakhmut. Wagner recently made gains in neighbouring Soledar. ‘‘They are both mining towns – gypsum in Bakhmut and salt up in Soledar,’’ Kirby said. ‘‘We think that also has a role to play in why Mr Prigozhin is so adamant on pouring, literally just throwing bodies into a meat grinder to get these two towns. It’s very much in keeping with his modus operandi in places like Africa, where he is going after mining rights and mining capabilities.’’ Prigozhin responded in a statement posted on his catering company’s VK page. ‘‘Finally, the Wagner private military company and the Americans are colleagues. From now on, our relationship can be called a ‘showdown between criminal clans’.’’ Meanwhile, Ukraine’s Western backers failed yesterday to resolve a dispute over which nations will supply Kyiv with powerful battle tanks that President Volodymyr Zelenskyy told them are needed to mount a new offensive against entrenched Russian forces. The disagreement, debated behind closed doors among dozens of defence ministers gathered at the Ramstein military facility in Germany, centres on whether Germany is willing to transfer its Leopard 2 tanks to Ukraine, or at least authorise other nations that field the German-made vehicles to supply them. –