‘OH I DO LIKE TO BE BESIDE THE SEASIDE’

When the weather allows, summer is all about diving into the freshest produce you can find – on land or in the sea – writes Sunday’s resident chef, Sam Mannering. 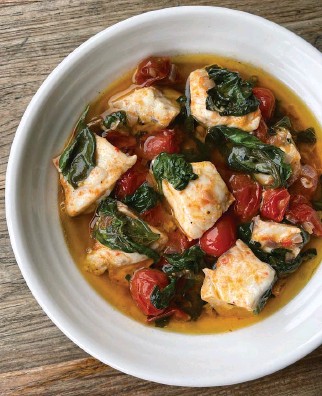 SICILIAN STYLE FISH STEW WITH TOMATO, BASIL AND CHILLI More fish? Damn right. It’s all I feel like eating at this time of year. I don’t need to go on about the joys of tomato, garlic and basil. Some things are cliches for a reason. I get very enthusiastic about recipes that consist of several ingredients in seemingly excessive quantities; plenty of garlic, tons of basil; generosity in earnest. So often it seems like basil is merely a garnish, which is a terrible, pointless waste. Use it in abundance – throw in fistfuls of the stuff. I went down to the fish shop at Port Motueka and found some fillets of snapper that were so lovely and thick that I could have sworn it was hāpuku. In any case, whether snapper, hāpuku or porae make sure it is reasonably thick, and, of course, as fresh as can be. PREP TIME: 10 MINUTES COOK TIME: 30 MINUTES SERVES: 3-4 • Olive oil (lots) • 4 or 5 cloves of garlic, finely chopped • Half a red onion, finely chopped • Half a mild-ish red chilli, seeds removed and finely chopped • 400g good cherry tomatoes • ½ cup dry white wine • Sea salt and black pepper • Lots of fresh basil leaves I used two big handfuls • 600g fillets of firm white fish, cut into 3 inch chunks 1. In a large frying pan, over a moderately high heat, add the olive oil, followed by the garlic and onion. Sauté gently for several minutes until soft and translucent. 2. Follow with the chilli and cook for a little longer before adding the tomatoes. Bring down the heat a little and continue to fry for another 7-8 minutes, stirring occasionally, until the tomatoes start to blister and break apart a bit. 3. Bring up the heat and pour in the wine. Let it bubble and reduce by half. Season well. Add half the basil and stir, and then nestle in the pieces of fish in a single layer. 4. Let it come back up to a bubble, then scatter over the remaining basil, pop a lid on and let it cook away for several minutes until the fish is only just cooked. 5. Drizzle over a little more olive oil, season with a bit of salt and pepper, and serve immediately. FRESH SWEETCORN AND AVOCADO SALAD I’m in Golden Bay at the moment. It’s one of my happy places. The beaches are so beautiful that they almost seem like propaganda. Similarly, the produce; it grows almost too well, as if auditioning for a Disney film. At the risk of sounding nauseatingly gushy, it all smells incredible, and it tastes even better. When you have such fantastic ingredients to play with, you don’t need to do too much. This salad may seem a bit simplistic but boy does it punch. If you like, pop a smear of hummus down on the serving dish and then spoon the salad over the top, to make it a little more substantial. Either way, it’s delicious. I’ve been known to shave a bit of parmesan over the top of this too. PREP TIME: 10 MINUTES COOK TIME: 10 MINUTES SERVES : 4 AS A SIDE • 3 ears of fresh sweetcorn, husked • Olive oil • Sea salt and black pepper • 1 tbsp cumin seeds • 1 avocado, roughly chopped • ½ red onion, finely chopped • Handful of fresh herbs – oregano, basil, that sort of thing • Freshly grated parmesan 1. Get a barbecue or oven grill really nice and hot. Rub the corn with olive oil and season well. Pop under the grill and cook on all sides, letting it darken and caramelise almost to the point of charring. Remove and let it cool slightly. 2. Toast the cumin seeds gently until fragrant and allow to cool. 3. Stand the sweetcorn on its end and carefully shear the kernels off the cob. Combine in a mixing bowl with the avocado, red onion and cumin seeds, a good seasoning of salt and pepper, and a glug of olive oil to dress. Fold in the herbs, and serve.